I tried making a paleo pretzel recipe today, but it didn’t turn out so well…. Its partly because I accidentally added the egg for the egg wash to the batter, so it was kinda stickier than I think it was supposed to be…. then I tried to sprinkle with cinnamon like suggested in the book, but I regret it. I prefer the salted ones. But both were kinda without a lot of flavor… Also, I think I’m eating too much almond flour / almond butter these days. I don’t know. Anyone know paleo baking recipes that don’t call for almond flour or nut butter?

Here are pictures of the fail… um, as you can see I had already tested a few of the pretzels when I took the pic. 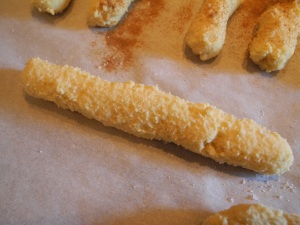 I’ll try doing some research into how real pretzels are made to see if I can come up with a better recipe to try next time.